The Path of Least Regrets

Caregiver's Tale: Tracy and Misty
AHELP Project's Animal Caregiver Support Program can be "A Help" to you when considering your choices for care, building a plan for comfort and contentment, and then empowering you to make the best decisions when the appropriate times come. One caregiver tells her own story of following her friend in the hospice journey with AHELP walking beside them. 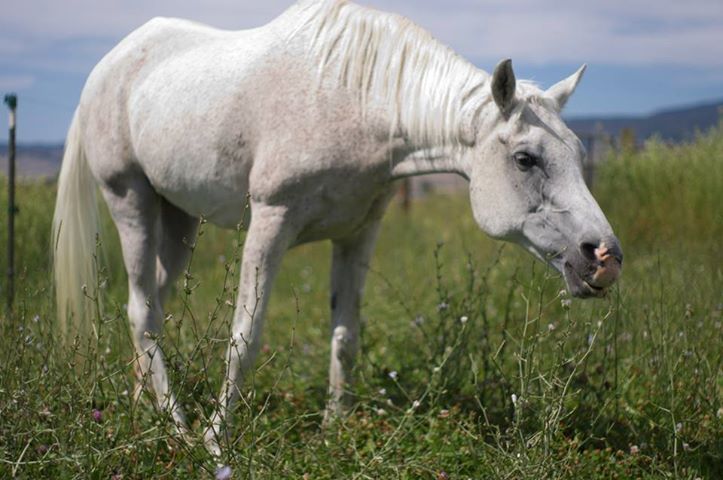 Misty in her golden years while under Tracy's care. (Photo: Mark Campion)

It’s the phone call no one who shares their life with a horse wants to receive: “Misty is down and she can’t get up. We think it’s time.” It was an early morning in late September. I was still recovering from an accident where I’d broken my sacrum and both sides of my pelvis. I struggled out of bed. Oh, Misty. Would I arrive in time?

I rescued Misty six years ago. My mother had known her years before I’d met her, but when she saw Misty, she was shocked: The Arabian was bony and covered in rain rot. Her eyes looked defeated. Her pretty little head hung low.

“Come on, Misty,” I said quietly. She followed me willingly into the trailer. I discovered that she had a habit of touching me with her muzzle for reassurance.

I called them her nose touches.

She touched me lightly as I tied her in the trailer. I gently touched her back. I thought I was taking her to a loving home to die in comfort. Instead, after months of TLC, she recovered. We traveled together for miles on the riding trails. She’d always come running when I got the saddle.

Several years ago, she just looked at me sadly as I got the saddle out. I knew then that her arthritis was too advanced for riding. She looked longingly from me to the trail and back again. So that day, I began taking her for walks along the trails. Anyone who has ever seen the joy of a senior dog going for a walk would know the joy of this sweet old horse.

Misty turned 31 in 2012. When her condition began deteriorating, I discussed a plan with AHELP Project. But time and again, Misty rallied. She just wasn’t ready to go.

On Friday, September 27, 2013, I left my house within minutes of the phone call. My Bluetooth toggled calls between Michelle Nichols, founder of AHELP, and Jennifer Downing, my friend who boards my horses. Michelle had agreed to drop everything if I needed her. I told her she’d already prepared me.

As I drove, I already felt the pain of her loss. When I arrived at the barn, she was lying quietly in her stall, a blanket draped across her body and beneath her beautiful head. I could see she was ready to go. I’d worried that she would be distraught, but Jerry never left her side, massaging her the entire time. I was so grateful.

“I’m here,” I said softly, even though she was deaf. But she heard me. Nose touch.

The vet arrived, assuring me that Misty was in the exhaustion stage. She had nothing left. Nose touch. As the vet quietly injected her, I stroked her face. She kept nose touching as long as she could. I closed her eyes and said goodbye to my good friend.

The loss is still profound. But thanks to AHELP, I had a plan – and that makes the pain bearable. I was able to walk the path of least regret with Misty – all the way to the end.

When your animal’s time comes, they’ll look for you. They’ll give you their version of a “nose touch.” Misty was looking for me. I was there. And when I nose-touched AHELP, they reassured me, too.